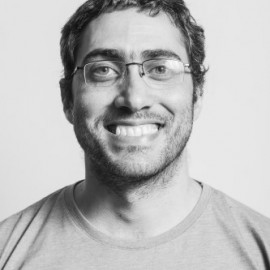 I feel very comfortable working with multidisciplinary research groups. For example, I have worked with biologists during a research about ants behavior and their exploration techniques (I have two conference articles in this area, entitled: Following an Ant’s path by a Mobile Robot and Harvest activity and Termal threshold of Acromyrmex Lobicornis ant), and with bioengineers and psychologists during my work with Human Machine Interfaces. I have been working with psychologists because we were studying how the biofeedback is related with the cognitive process of individuals that present some kind of physical disability.

Dr. Fernando A. Auat Cheein is an Associate Professor at the Universidad Técnica Federico Santa María, in Valparaíso, Chile. He received his degree in Electronics Engineering -with honors- from the Universidad Nacional de Tucumán, Argentina, in 2002, becoming one of the youngest engineers in Argentina, the Master and the Doctorate degree in Control Systems from the Universidad Nacional de San Juan, Argentina, in 2005 and 2009 respectively, obtaining in both, the excellence grade. His Master’s thesis concerned the development of Brain-Computer Interfaces (BCI) for controlling robotic devices (robot manipulators, mobile robots and robotic wheelchairs). His doctorate’s thesis focused on SLAM (Simultaneous Localization and Mapping) algorithms applied to mobile vehicles, including robotic wheelchairs. He has several publications in both the robotics field and the rehabilitation field.

He started his researcher carreer during his post phd on agricultural robotics, in Argentina, where he published his first ISI journal paper in 2009. Since then, Prof. Auat Cheein has published near 20 ISI journal papers in top ranked journals and several chapter books. He has lead his research in the 95% of the publications (as corresponding author). Several of his publications have been awarded as selected or best papers. He is currently a reviewer of numerous indexed journals, member of conference scientific committees and acted as an Editor from an ISI journal. His main research interests are:

In the topics mencioned above, Dr. Auat Cheein has ISI journal papers in the top ranked journals. His students are currently working on the following topics:

The local TV show: University and Society, made a documentary about my work developed within the cooperation project between the National University of San Juan, Argentina, and the University of Porto, Portugal. The documentary can be seen at the following link: http://www.creacom.unsj.edu.ar/reproductor.php?Id=103&capitulo=1 (I appear from the minute 15 aprox.).

The Political National Magazine “Veintitres” (number 336, year 7) published in 2004 an article entitled: “Your Thoughts are Orders” based on my work: A Brain-Computer Interface Design for Mobile Robot Navigation (my master degree thesis).

Several columns (written by me) or news about my work have appeared in several National and International Newspapers and Magazines, such as in Segre Daily News (Lleida, Spain), La Tercera (Chile), RevistaElectronIndustria (Chile), El Mercurio (Chile), La Cuarta (Chile); and several webpages. For a more detailed enumeration of the news about my work, please visit: http://profesores.elo.utfsm.cl/~fauat/?page_id=29.